League Vision
To promote high level competition and sportsmanship with the aim of encouraging multicultural, multigenerational bocce play, and establishing the gold standard for bocce leagues in the Delaware Valley.

Welcome to the home of the Pete DiCianni Memorial Bocce League, the Premier Bocce League in South Jersey! Founded in April 2014, the non-profit league has enabled its 150+ members from across South Jersey and Philadelphia to compete over the past 5 years.

Similar to horseshoes, bocce is a game of skill that does not depend on age, strength, speed or agility. It enables 8 year olds to compete with 85 year olds, and they do very effectively!

We look forward to welcoming new players and teams. Visit our Frequently Asked Questions and feel free to contact us at commissioner@pdcbocce.com if you would you like to learn more about our league.

We hope to see you on the courts. 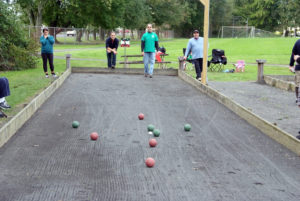