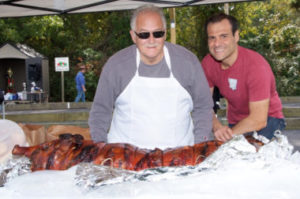 The 1st annual Playoff Tournament and League Picnic took place on Saturday, October 20. The tournament started sharply at 8:30A and the final ended around the same hour in the evening. Teams “set up camp” for the day and they competed against one another for the Championship trophy. Two temporary courts were erected in the grass nearby the courts such that a full, double-elimination tournament could be conducted and lots of bocce could be played! All attendees were treated to delicious porchetta (roast pig) from Esposito’s in South Phila, and many teams generously donated delicious sides to share such as broccoli rabe, macaroni salad and desserts. In the end, the Berlin Ball Bangers, emerged victorious after an exciting match against reigning champs, La Famiglia Bocce.

It was a wonderful conclusion to a long, intense season! We look forward to playing bocce again next Spring in May!

Would you like to join us next season?  We hope you do! Please contact us at commissioner@pdcbocce.com.